I'm trying to blast though some inertia with an arm blast challenge.  I took this picture in the summer of 2018 and I've lost some definition since then.  Jordan and I are going to drive to Durham on January 10th.  So in the 40 days between now and then, I'm going to train with two-on, one-off arm days.  Five hard biceps sets and five hard triceps sets two days in a row and then a day off.  This is in addition to my regular lifting, yoga and cardio.  That will give me and extra 26 hard arm days and 12 off days.

I'm 97 days into my 16:8 intermittent fasting streak.  I stop eating at about 7:00 PM and set the timer for 16 hours and then start eating again at about 11:00 AM.  I'm planning to hike Grand Canyon on April 4th and I'm hoping to extend the streak until my breakfast at Phantom Ranch.

I have gained about 10 pounds since I took this picture and I'm working my way back down from about 162 to about 150.

Zen the Day.   I was up at 5:30, cooked breakfast for Deb, worked for a few hours and went to Yoga.  I'm meeting a client for lunch and then attending some meetings.  I have a fundraiser tonight and I should be home by 7:00.  I'll cook dinner, spend some time with Deb and be in bed by 9:00.   There will be a time when I would give anything to live this day over again.  They key is to recognize that fact when I'm living it the first time.

I hosted a Continuing Legal Education Lunch on the topic of Social Media, and at the beginning I said "Let's go around the room and you can tell us who you are, the name of your firm and whether you are pro-choice or pro-life."

They were stunned for a moment and then when I started to grin, they broke out laughing at the absurdity of my request.  While such a disclosure be absurd in a professional situation, it is common on line.

If we consider it absurd to say something in front of 20 colleagues, we probably shouldn't Tweet out to 1,000 people.

Let me ask you a question.

In social situations, people ask me what I do and when I say that I'm a lawyer, they occasionally respond "oh, great.  My sister is going through a divorce and I was wondering...."

At that point I raise my hands and say "I don't do family law."

Think about that for a second.  I went to law school for three years, then I passed the Bar Exam and I've been practicing for more than a decade, but I don't feel qualified to answer your family law question.

Of course, if you ask me about Climate Change, Charter Schools, NAFTA, Gun Control, vaccine safety or Obamacare I am happy to discuss them with you.  The irony is that those topics are much more complex than family law.  Furthermore, I have no special training or expertise in any of those topics.  Yet I am quite comfortable telling you exactly what I think.

The reality is that my "expertise" consists of reading selected blog posts that confirm my preconceptions on those topics.

I don't think that I'm the only one who makes that mistake. 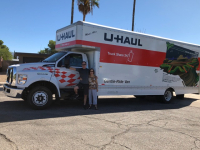 My in laws are having some health issues and we just moved them from Tucson to Modesto so that they would have access to better care.   As Humans, we have a strange attachment to our stuff and rather than giving away their house full of stuff, flying them to Modesto and replacing it at Target we spent a couple days loading it onto a 26-foot U-Haul truck and then I drove it 1,000 miles to Modesto.

Most of the route was in California and it included a stint in LA so I was pretty nervous.  California driving is Darwinian and I knew that I would be at a competitive disadvantage.  I spread the trip out over four days and counted the times that someone cut me off.  That number would be:  Zero.

And do you know what happened whenever I signaled a lane change?  People slowed down to let me in.

I was beginning to think that California drivers had suddenly become polite but then I realized what was really going on.  Nothing screams incompetence like a rented 26-foot truck.  Drivers who were tempted to cut in front of me realized that I would do my best to avoid hitting them--and that was the problem.

California drives treated me with respect because they knew that I was incompetent.

I've been in a lot of high-level negotiations.  I've been on the leadership team for two multi-billion dollar mergers.  I've settled a dozen $100 million rate cases and negotiated a few multi-million dollar salary packages.   Usually these negotiations go well, but sometimes they go badly.  Sometimes other parties will blow something up and my clients will comment on how evil they are.  My clients believe that the other party has hurt everyone else through pettiness or spite.  Of course, I've blown up a few negotiations myself and I'm sure that the other parties wonder why I am occasionally so mean.

My response?  "Ask yourself if they are evil or incompetent."  Most of the time you will settle on "incompetent."    Why do they go wrong?  Because, unlike when I drive a truck, when I negotiate, my incompetence is not obvious.  Parties engage in risky behavior because they underestimate the incompetence of the other parties.

There are reasons to be polite.  We signal our lane changes and avoid cutting off other drivers for the same reasons that we grant extensions, write clear contracts and disclose our weaknesses.  We do those things because it is important to treat people with respect.

We also follow those protocols in case we have made the mistake of overestimating the competence of the other party.  A rented truck is a 26-foot long billboard that warns you not to overestimate me.

Maybe we should all start writing that on the top of our briefs.

Here's the parable of my life.  "A stressed out executive goes to a Zen Master and says "what can I do to relax?"  The Master replies "Walk for 20 minutes each day."  The executive thinks for a moment and replies "how far will I be in a year?"

The story is not intended to be funny.  Quite the opposite.  I am that executive.   I don't seem to be able to do something unless I view it as a small part of something larger.  I don't workout unless I'm training for a Grand Canyon hike.  I don't study Spanish unless I'm planning to work in Mexico.

That would be fine except when I don't work out or study, I feel like my future is collapsing.  Conversely, when I eventually realized that I would never be fluent in Japanese, I felt like the five years that I spent studying it was wasted.

The Zen Master parable is meaningful to me because the executive's follow-up question is absurd.  Since the goal is to relax daily, the distance I walk in a year is meaningless.  In fact, it's less than meaningless...it's a distraction.  The annual goal defeats the entire purpose of the exercise.  The unit of time is not a year, it is a day.  The answer is Zen the Day.

That's not a new thought, but it is a new realization.  This journal will record my effort to put that realization into practice.